Comments Off on Iran Tour in February 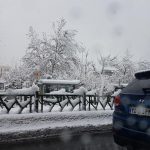 Spring weather in the middle of winter? Yes, you can experience that in the southern areas of Iran. Snows in Iran create attractive landscapes in the Iran’s main cities and in the roads through the mountains covered with snow that makes it exciting to tour Iran in February.

Iran what to wear in February

For visiting southern cities you need a light jacket, sunglasses, sun screen and cap on sunny days and an overcoat during night time will be fine.

For other areas, warm coats, boots and shawls are necessary in February.

Visiting Khuzestan, home to one of the world’s oldest civilizations (Elam) is highly recommended in February’s fresh and cool weather. The enormous Choqazanbil temple built about 3000 years ago for worshiping Elam’s god (Inshoushinak) and Shoushtar’s historical hydraulic system dating back to King Darius era(500 B.C.), which is a masterpiece of creativity in optimizing water and “Shoush” (Susa), an ancient city, are three historical heritages in Iran, inscribed in (UNESCO)’s list that you can visit in Khuzestan.

Sistan-va-Baluchistan has weird tourism attractions although it is not a common destination. You can visit “Shahr-e-Soukhteh” (the burnt city) near Zabol, which dates back to 6000 years ago! “Shahr-e-soukhteh” is a world heritage inscribed in UNESCO’s list.

Or visit Chabahar seaport’s attractions with paddle board and lost in mangrove forest with its unique seabird species like flamingo, eagle, heron and etc., or Martian mounts which are extremely beautiful, indicating a weird geometrical phenomenon.

Iran must do and see in February

1-11th of February are Iran’s national ceremony days for the victorious revolution in 1979. During this month a great international art festival named “Fajr”, is held in Tehran and some other cities. This festival includes film, music, theatre and visual arts competitions and you can get familiar with Iran’s contemporary art in different branches.


This item is being updated

Book a trip in February