Comments Off on Iran Tour in September 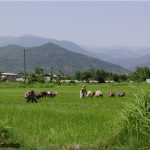 The weather conditions in cities like Tehran, Isfahan and Shiraz is falling to about 30° Enjoy less crowded attractions as the month of September is back to school month.

Tehran, known as the city of museums and monuments from Qajarid dynasty, such as national jewelries museum, Iran’s carpet museum, Tehran contemporary art museum and ancient Iran museum are some examples of museums offers priceless pieces in the city.

Isfahan used to be the strong hold of the Safavid kings 400 year ago, ruled Iran and chose Isfahan as their capital for some decades and builders of the splendor and registered world heritage Naqsh-e-jahan or Royal Square, surrounded with two beautiful mosques, bazar and the great Aliqapoo palace.

Iran must do and see in September

It’s pistachio harvest month in Rafsanjan, Kerman and rice in Gilan and Mazandaran provinces. So traveling to the northern or southeast part of Iran is an option to be considered.

Iran tour recommendation in the month of September but not limited to:

Book a trip in September