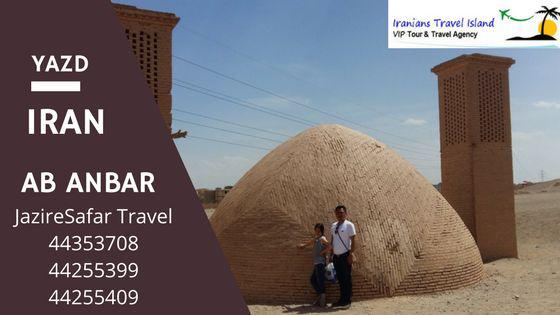 Iranians throughout history have advance civilization. This civilization has been the fountain head of many famous scientist, artist, poet, innovator and craftsmen.

Iran plateau with unique climate and weather conditions – being close or away from lakes or sea has contributed so much to its innovation.

Most of the Iran's region has no permanent or lack of stream or source of water. Thus, acquiring and preserving the existing supply of waters has been very important matter to the people in those times.

In the past there was no water pipe network in many of the cities like now a days. How do you think water made available to people back then in those old days?

To send water to their home, Iranians built water-storage tanks a system to store water inside. This water-storage system called "Ab-anbar".

Ab-anbar is a huge roofted fond used to store huge quantity of water collected from autumn rain, spring rain and other sources such as qanat which means canal or string links to it.

Ab-anbar is usually built underground to keep out from the direct summer heat from the sun. In this case it prevents water from possible evaporation.

Ab-anbar usually have "bad-gir" or "windcatcher" tower built with.  The bad-gir helps cool inside the Ab-anbar as a result it helps clean air get inside Ab-anbar and keeps water from getting bad odor and smells.

Ab-anbar has been built in many areas. Or in every particular place around the city: Provinces lack of stream or running water – in Kervansarai, or along the trade route of that time.

If water remains steady in a place can be contaminated. The reason is the bacteria that grow there.

To keep the water clean and usable inside Ab-anbar they do some works for that matter:

First, before entering water to ab-anbar they let it pass through a small pond full of sand to separate dirt or sort of from it. Then they add some salt or lime to disinfect. Or they hung some baskets full of charcoal around ab-anbar to prevent water from absorbing bad odor.

The oldest ab-anbar were, belong the Elam civilization has been built more than three thousand years ago in the Khuzestan region.

There are many ab-anbar that has been transformed into tourist attraction in many parts of Iran such as Ghazvin, Yazd, Semnan, Fars and Khorasan.