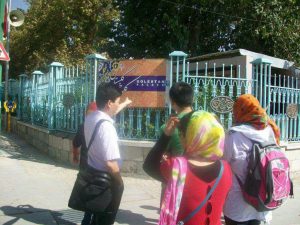 A short history of the Golestan Palace

The oldest of the historic monuments in Tehran, the Golestan Palace (palace of flowers) belongs to a group of royal buildings that were once enclosed within the mud-thatched walls of Tehran's Historic Arg (citadel). The Arg was built during the reign of Tahmasb I (r.1524-1576) of the Safavid dynasty (1502-1736), and was later renovated by Karim Kahn Zand (r.1750-1779). Agha Mohammad Kahn Qajar (1742-1797) chose Tehran as his capital.

The Arg became the site of the Qajar (1794-1925) court and Golestan Palace became the official residence of the royal family. During the Pahlavi era (1925-1979) Golestan Palace was used for formal royal receptions. The most important ceremonies to be held in the Palace during the  Pahlavi era were the coronation of Reza Kahn (r.1925-1941) in Takht-e-Marmar and the coronation of Mohammad Reza Pahlavi (r.1941-deposed 1979) in the Museum Hall. In its present stata, Golestan Palace is the result of roughly 400 years sonstruction and renovations. The buildings at the contemporary location each have a unique history.

The Golestan Palace complex is a historical memorial remaining of Tehran citadel. The building is shining like jewel. The founding date of this citadel goes back to the days of Safavid era during the time of King Tahmaseb the first. Turned into royal citadel during the time of Karimkhanzand and became special royal residence of the Qajarid kings.

Golestan Palace is the result of roughly 400 years constructions and renovations. During the life time of Nasroddinsha he devoted much time to improve and made a lot of changes to the palace complex.
Most or 3rd quarter of the total area of this citadel serves as the kings palace and governance. The palace is very much like of those typical traditional Iranian houses that has two main characteristics indoors and outdoors features. Parts of outdoor features are the open courtyard and a square-shaped garden called golestan (rosegarden).

Some of the wonderful work of arts and architectural features in the complex are: