Comments Off on Mirror Hall (Talar-e-aineh) 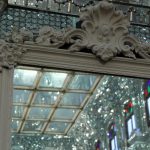 Talar-e-Aineh (Hall of Mirror) is the most famous of the Palace halls. This relatively small hall is famous for its extraordinary mirror work. The Hall was designed by Haj Abdoul Hossein Memar bashi (Sanie-ol-molk). Yahaya Khan Motamed-ol-molk, the Minister of Architecture, acted s consultant to the designer.

Comments Off on Persepolis 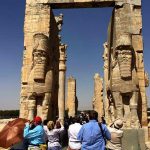 Comments Off on Marble Throne (takh-e-Marmar) 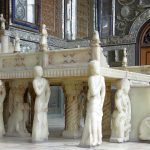 The spectacular terrace known as Takht-e-Marmar (Marble Throne) was builth in 1806 by order of Fath Ali Shah Qajar (r.1797-1834). Adomed by paintings, marble carvings, tile work, stucco, mirrors, enamel, woodcarvings, and lattice windows; the throne embodies the finest of Iranian architecture. The marble throne is one of the oldest buildings of the historic Arg. The existing throne, which is situated in th emiddle of the terrace (ivan), is made of the famous yellow marble of Yazd province. The throne is made of sixty-five pieces of the marble and was designed by Mirza Baba naghash Bashi (head painter) of the Qajar court. Mohammad Ebrahim, the Royal Mason, oversaw the construction and several celebrated masters of the time worked on the execution of this masterpiece. The architecture details and other ornaments of the terrace were completed during the reign of Fath Ali Shah and Nasser-ol-Din Shah (1848-1896). Coronations of the Qajar kings, and formal court ceremonies were held on this terrace. The last coronation to be held at Takht-e-Marmar was the coronation of Reza Khan Pahlavi in 1925.